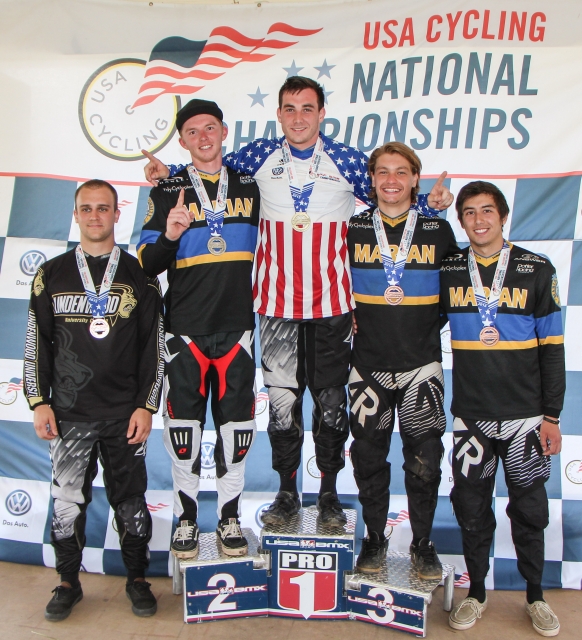 The men’s podium on Sunday-

Powder Springs, Ga. (April 26, 2015) –Marian University claimed the division I team omnium for the third year in a row at the 2015 USA Cycling Collegiate BMX National Championships on Sunday after its riders Justin Posey and Felicia Stancil repeated their wins from a year ago for this year’s men’s and women’s individual titles.

Mars Hill University was the team omnium champion in division II thanks to strong efforts from Alan Hudson who was sixth in the men’s competition, and Josie Ritchey who was ninth in the women’s contest.

Held in conjunction with the Dixieland Nationals at the Cobb County BMX track in Powder Springs, Ga., the collegiate event debuted its new two-day format this year. Coeds raced on both Saturday and Sunday with the national champions determined from the combined scores of both days.

Posey and his Marian teammate Bryce Hocking went one and two on both days of racing to secure their gold and silver medals on the national championship podium. Marian’s Luke Roarty was fourth on Saturday but then grabbed third on Sunday to take his place on the podium’s third step.  Fourth place went to Jacob Sherbno of Lindenwood University thanks to his fifth-place finish on Saturday and his fourth-place effort on Sunday. Tyler Whitfield’s third-place ride on Saturday was enough to grab him the final step on the men’s podium – giving Marian four of the five steps. 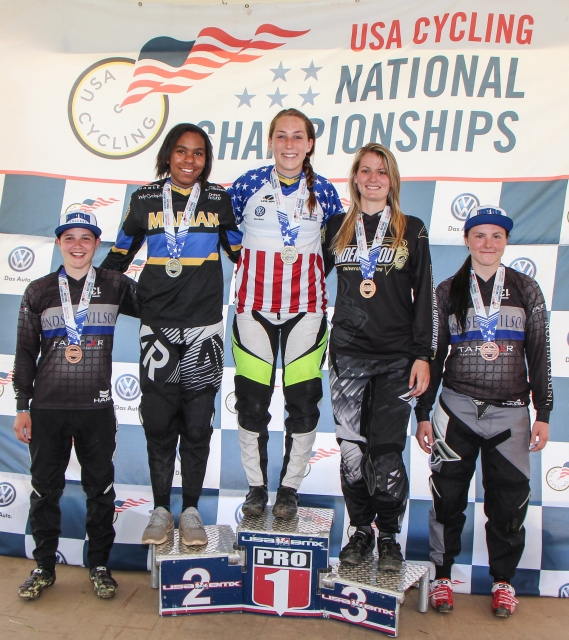 The women’s podium on Sunday-

In women’s racing, Stancil won both Saturday’s and Sunday’s races and her Marian teammate,Kristen Bob, was second on both days to give Marian the first two steps of the women’s national championship podium. Madison Pitts(Lindenwood University) used two third-place finishes to grab the bronze medal while the Lindsey Wilson College duo of Adrian Sanders and Sabrina Bice placed fourth and fifth.